This is a 2-player game where the offense has 8 different plays to choose from, and the defense also has a choice of 8 plays. 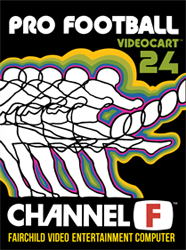 Your quarterback can run the ball or pass to one of his receivers that are out on their patterns.

But watch out for that blitzing linebacker or that defensive back that could intercept the pass. Your teams will huddle, break and line up to get their play off in 30-seconds. You can score by a field goal as well as a touchdown. And if you can defensively push your opponent into their own goal, you are awarded a safety. So, after the fight song ends, let's get out there and play ball!

Have you studied the eight offensive plays and the eight defensive plays? Are you ready to go out on the gridiron to test your football skills against your opponent for four grueling quarters?